Let's say you've snapped some shots on two sets, an interior set and an exterior set.  Then you decide to change the look of an actor, such as an article of clothing or a tattoo.  So you change the actor in the live view, and with the actor selected, choose the menu command Percolate > Current Object's State into Shots.  After the percolation finishes, you discover that it has updated the actor only in one of the two sets.  The probable reason is that it's not really the same actor, they're twins.

Identical twins are rare in the real world, but are very easy to create in FrameForge.  All you have to do is drag the same actor from the object library onto the set twice.  The two actors may look identical, but FrameForge keeps track of which is which using an internal ID number.  Each time you drag an actor onto the set, or use the Duplicate command, a new unique ID number is assigned.  When you percolate an object state, you will only change that exact object, not any twins that may exist in your shots.

If you discover you have a twin problem after creating shots on multiple sets, it's too late for copy and paste to be a good solution.   Let's say, for the sake of argument, your interior set has shots with an actor assigned the alias Alex, and your exterior set has an accidental twin assigned the alias Bob.  You want to replace Bob with Alex in all shots.  Here's how to do it:  First go to the interior set and copy Alex.  Then load an exterior shot with Bob and paste Alex.  Select both Alex and Bob.  Choose the menu command Percolate > Swap Objects in Shots.  In the percolation options dialog, say you want to percolate through the entire storyboard.  At that point, FrameForge will show another dialog asking for a clarification: 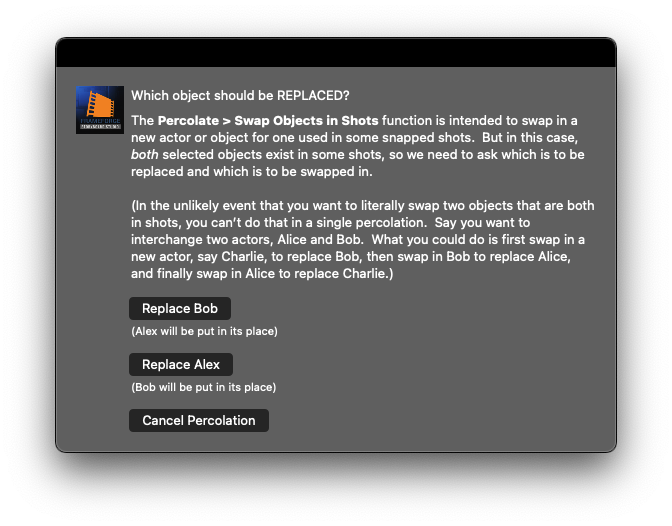 Click the Replace Bob button.   When the percolation is complete, you'll have only Alex, but in the shots that had Bob, Alex will be positioned and posed the way Bob was.