is made up of of the three boxes in the lower right hand corner of the main interface, highlighted in yellow in the image below.  It shows where the next shot you snap is going to go. 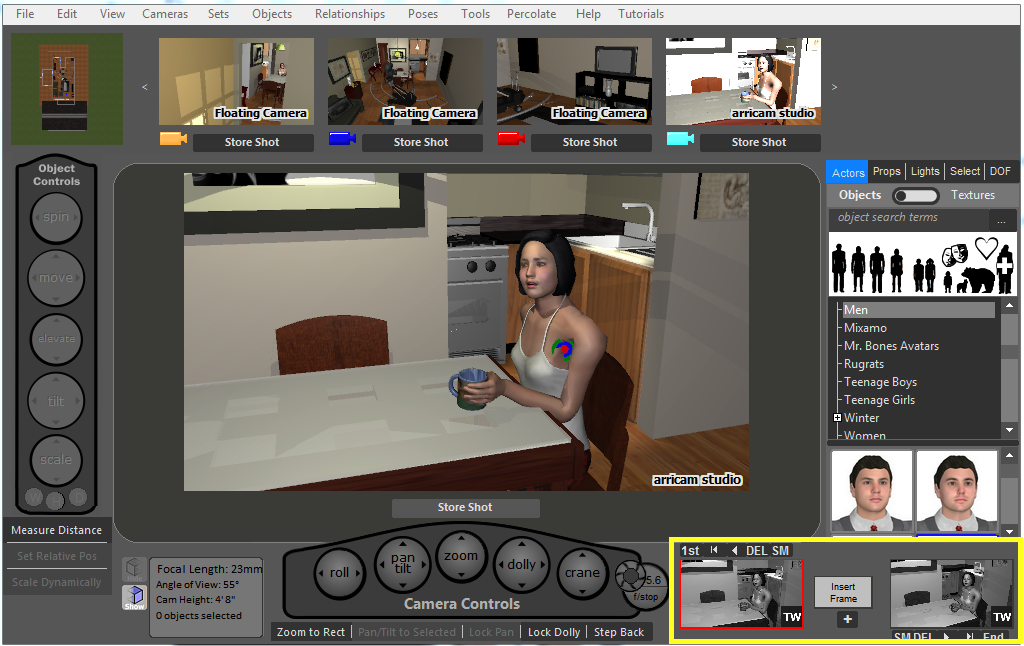 Think about a cursor in a word processor.

In addition, you can have the cursor in INSERT MODE or REPLACE MODE.  In the former, when you type text, the existing text is simply pushed over to the right; however, in the Replace Mode, any new text you type will overwrite the old text.

The shot preview area is just like that cursor in that it shows you where the next frame you snap will go.  In the image below, you will see that there are two frames and in the middle there is a box with a red frame around it that says INSERT FRAME.  Because this box is highlighted in red, you know the next shot you snap will be INSERTED between those two frames.

If you go the end of your storyboard -- done simply by clicking the END button under the right image if you aren't arleady there, you'll see that the right image goes blank and the middle box's text changes to APPEND FRAME, meaning that the next frame will be appended or added  after the current last frame.

When you reload a shot, however, either by double-clicking on either of the two images in the Shot Preview area here, or by starting in the Shot Manager and reloading  from there, the program assumes you are editing an existing shot and that when you snap it again, you want to replace the old one.  It indicates that is going to happen by highlighting the shot it will replace in red like so:

If you DON'T want to replace that shot, simply click the INSERT FRAME Box, which will move the insertion point between these two frames, or scroll to wherever you want this new shot to go by changing the insertion point in the shot preview area before you snap the shot.

NOTE:  A neat trick is that if you hold your cursor over the preview area and scroll your mouse wheel, these shots will scroll as well.

Forgot to change the insertion point before snapping that shot?  No problem.