If you aren’t familiar with FrameForge’s Tweening functions you should first read about it as this section assumes you have a good understanding of its basic functions and terminology, and it only covers the new Tweening options introduced in Version 4.

Up until now, each snapped frame that you used to create your tweens was kept exactly as-is, and only the generated frames between it and the next frame were created or changed.

Thus if you were shooting a baseball game, for example, and the actor was supposed to start at home base, then run around all the bases and finally return to home base, the tweening would have him stop at each base in turn rather than just continuing to run the whole circle with­out interruption. 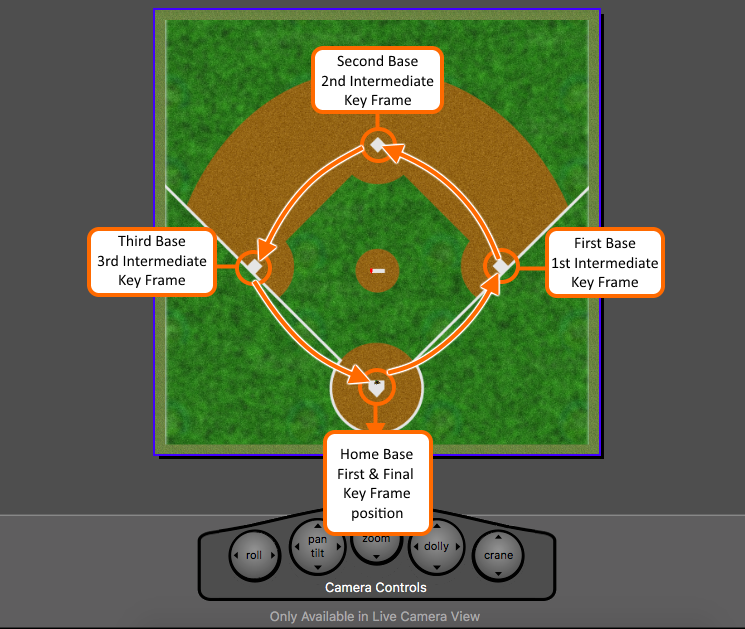 This new Version 4 feature solves this problem by letting you tell the program that an actor is not stopping in any given frame, but is instead merely changing direction and the tweening will reflect that.

Setting a Frame as a Waypoint

A quick caveat here – it’s not actually the frame that’s set as a waypoint, its the actor or actors in the frame who are given waypoint status. And while it’s rare that you’d want only some actors in a frame to treat it as a waypoint while others would not, you absolutely can do it.

However, for ease of speaking about it, we’ll continue to talk about setting the frame as a waypoint and you can just know that it’s actually even more powerful than that!

There are two places where you can specify that a frame is a waypoint. The first, and best, is in the standard Storyboard Manager, where you’ll find the OVERRIDE WALKS button in the top row of buttons just under the Shot Thumbnail area, as shown in the image below.

We say that this is the best place to do it because within the shot manager, you can select any number of shots prior to clicking the Override Walks button and it will then apply any setting you chose to all of the selected ones at the same time..

Regardless as to how many frames you have selected when you click th e Override Walks button, it will launch the Walk State Editor where you can override a number of tweening effect, specifying different values for different actors as desired.

HINT: If you give your actors Aliases (see the full manuals for details as to how) you’ll have useful names in this dialog rather than Caucasian Man III or the like.

The new waypoints option is at the bottom of the first option Action During Tweening and you need to set it for every actor for whom this shot is a waypoint.